Omaha’s Henry Doorly Zoo is the zoo that I grew up visiting. My parents are from South Omaha and I was brought home from the hospital to a house on 13th Street a few blocks away from the zoo. Since then, the zoo has grown considerably.  Recently we had the chance to visit the Henry Doorly Zoo with my sister and Dad.

The Henry Doorly Zoo dates back to 1898 when it was a small park with 120 animals called Riverview Park. Through the years the zoo has continually grown, although the zoo has really grown the last 25 years becoming a first-class zoo.

Highlights of the Henry Doorly Zoo include:

Built in 1992, the Lied Jungle was the world’s largest indoor rainforest at the time. Two levels lead you through the treetops of the rainforest and the rainforest floor. Watch for flying birds and bats! My kids loved the pygmy hippos.

Hands-on activities and exhibits of small mammals, tarantulas, and snakes. During our visit, there was an informational presentation about penguins which included a live penguin and the opportunity to pet the penguin at the end.

Desert Dome & Kingdoms of the Night

Opened in 2002, The Desert Dome is the world’s largest indoor desert. Displays feature plant and animal life from three deserts around the world. Beneath the Desert Dome, the Kingdoms of the Night is the world’s largest nocturnal exhibit. Kids might be a little frightened at the bat displays. And take note, it’s very dark; you might want to hold hands or load smaller kiddos into strollers as it’s hard to see. My kids’ favorite part is the alligators. The alligators were so close to the deck walkway that a little bit of you worried that the netting and fencing were enough to keep them from chomping off your feet. 🙂 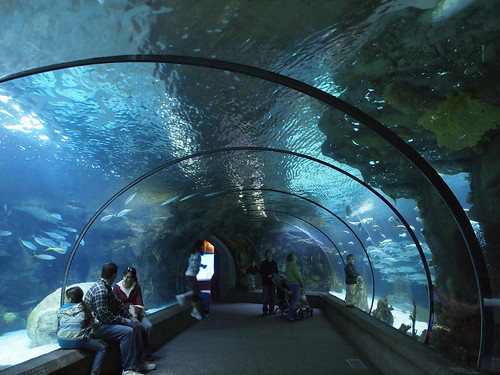 When the kids were little I would have us lay on the floor of the 70-foot shark tunnel and pretend that we were laying on the bottom of the ocean floor. Sure we got some strange looks but it was fun. Other exhibits include moon jellies, shark exhibit, and coral fish. Find Nemo and Dory! Check out the penguins from the bubble insert into their water tank. You’ll feel like you’re right in the water with them. This year one penguin thought Momo’s map was a fish and would follow her back and forth as she walked along the glass.

But that’s not all, don’t miss the bear exhibit, the giraffes and one of the oldest exhibits- the Sea Lions!

1. Don’t let the hot, humid Nebraska Summer weather deter you from visiting the zoo. Henry Doorly Zoo has many buildings with air conditioning. A full day can be made of visiting each of the indoor exhibits. For this same reason, a trip to the zoo is a lot of fun if you visit Omaha in the winter.

2. In June, the College World Series of baseball comes to Omaha. Although the CWS is no longer played at Rosenblatt (which is now gone), the zoo is very busy during the day with baseball fans.

3. The Tram or Skyfari is well worth the small price to help get you around the zoo. The Tram is a lifesaver if you are visiting the Children’s area and heading toward the Main Entrance as the hill going up is a killer after walking all day. The Skyfari is great if you’ve reached the other side of the zoos by the Rhinos and want to get back near the main entrance. The tram is best if you have a stroller as there’s no room for strollers on the Skyfari!

4. The train is a great way to see the spread out older part of the zoo that you may not want to walk to.

5. While there are many great places to eat at the zoo, there is a big picnic area in the older part of the zoo. We ate lunch near the Scott Aquarium. We all had personal pan pizzas and three souvenir-sized refillable sodas. If the weather isn’t cooperating you may want to eat at an indoor restaurant such as Durham’s Treetops Restaurant inside the Lied Jungle.

Overall, the Henry Doorly Zoo is a great zoo to visit. Plan on a full day if you only plan on visiting once.  The zoo is definitely membership worthy if you are going to be in the Omaha area twice during the membership period.

Heading to Omaha? Find a hotel with accommodations for 5, 6, 7, 8 to sleep your big family at SixSuitcaseTravel.com.