A short 6 miles away from Custer, SD is the great Crazy Horse Memorial. When finished, it will be the largest sculpture in the world at 641 feet wide and 563 feet high. Started in 1948, the sculpture commemorates the Native American people and was sanctioned by Lakota Chief Henry Standing Bear. 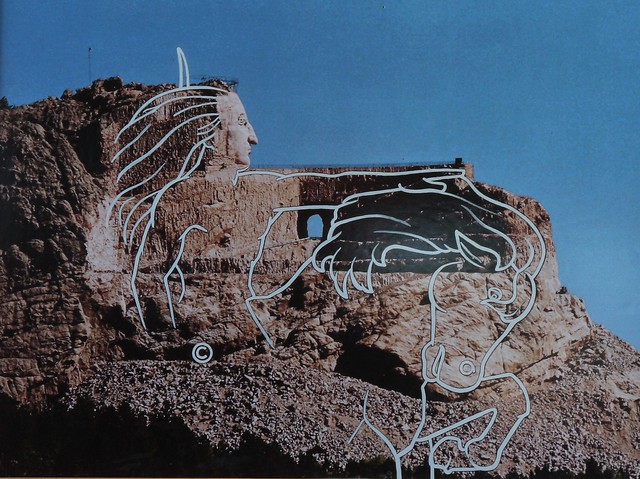 “My fellow chiefs and I would like the white man to know the red man has great heroes, also,” wrote Standing Bear when he invited Korczak to the Black Hills to carve Crazy Horse.

The memorial was busy but not overly crowded. We saw the movie which was strangely mostly about the sculptor, Korczak Ziolkowski.

The first building housed some Native American history but mostly facts about how the memorial has been built so far, how it will look, and the plans for the area around it. When completed the memorial area will include the Crazy Horse Memorial, Indian Museum of North America, and Indian University of North America & Medical Training Center.

Many of the other buildings were mostly again about the builder and his life, wife, and 10 kids. The builder refused federal funds of $10 million twice. Ziolkowski felt the project would be compromised by federal interest and believed it was better to go with private money. I think he short-changed the Native Americans by not taking the federal funds. The memorial was started in 1948 and is nowhere close to completion. Recent work has been made on the hand above the horse’s head. 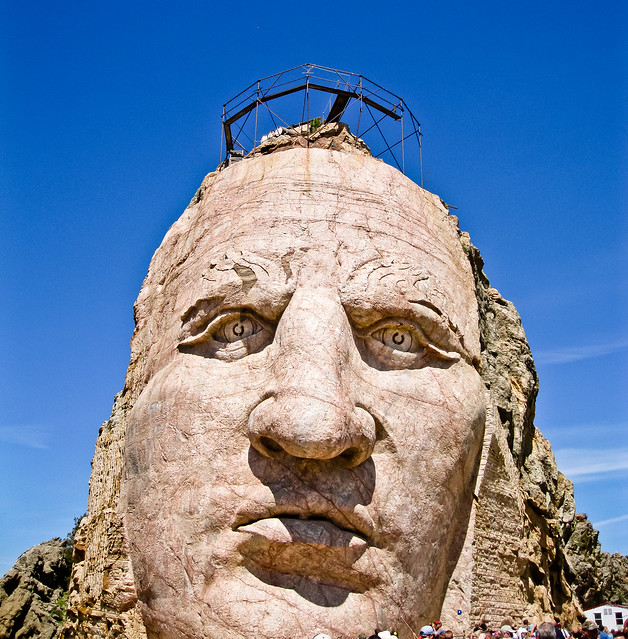 Crazy Horse was born on Rapid Creek in the Black Hills of South Dakota in 1842.  He fought the federal U.S. government to preserve the Lakota people’s land and way of life and against being relocated to a reservation.  He was involved in many key battles. Crazy Horse was stabbed in the back at Fort Robinson, Nebraska during a scuffle with soldiers who were trying to imprison him in a cell.  He died on September 6, 1877.

Other buildings at the memorial include a Native American Cultural Center, The Indian Museum of North America, the sculptor’s Workshop, the Sculptor’s Log Studio Home, a snack shop, Laughing Water restaurant, and a gift shop.

2021 admission prices start at $15 per person. We found it cheaper to pay the maximum of $27 per carload (2021 – now $35). That price divided by your big family makes it cheaper than the price of going to a movie which is about how long your visit will last. For an extra $4 per person, you can take a short bus ride to an area close to the sculpture.