My husband and I have always enjoyed traveling.  The anticipation, the adventure itself, and then the memories made that we can carry with us for the rest of our lives.  We traveled before kids and then continued as we grew our family.  We have had to readjust as we added more to our big family – but we’ve always made travel a priority. Visiting family, camping, and exploring the outdoors were  favorites when the kids were little.  In the past few years, we’ve been blessed to be able to take longer and more exciting adventures.  After our big trip across the US, we started looking at a vacation across Europe – the next “easiest” continent for exploration with a large family, in our opinion.

Our US road trip logged over 12,000 miles and provided 2 months of togetherness….and it was an incomparable learning experience and an amazing adventure.  So many memories made that we thought we should give it another try – but this time about 6,000 kilometers and just over one month of time together- on a totally different continent.

This time we’ve got all togetherness and mileage plus international flights, passports, language barriers, new and different foods, and  money exchanges.  We were traveling by plane, van and ship – to and in Europe to drive our way through some of the most amazing history, culture, and scenery in the world.

So we started planning – which grew our anticipation and excitement!  We quickly discovered that the airfare would be a large part of the budget.  We’ve not flown with the kids since 2000, when we only had one.

Flying while easy, quick and convenient has not been an option for us since having multiple kids as the total airfare with a rental car was usually comparable to what we could use to fund an entire vacation if we drove.  This time we HAD to fly as driving to Europe obviously isn’t an option.   We found that flying into and out of major airports was going to save us quite a bit of money and that renting a van to the airport and then another for the drive home was going to be more affordable than driving our car and parking for a month, and that surprisingly, a side trip to Iceland would be the same price as a direct flight.

Icelandair is currently promoting a stopover option for their travelers.  For the same price as a ticket on any of the other major airlines (cheaper than some of them, actually), we were able to fly to Iceland, and layover for up to 7 days before continuing to mainland Europe.  It was an option of which we felt we had to take advantage.

We also needed to plan transportation while in Europe.  Our options seemed to be narrowed to either the Eurail train system, cheap European flights, or driving ourselves.  We researched each option endlessly as the trains in Europe are well known for affordability, reliability and convenience and some air options (for example Ryan Air) are known for the ridiculously low cost to fly between major destinations.

The deciding factor for driving was the ease and accessibility that came with our own vehicle.  Both the Eurail and a van costed out similarly but with our own vehicle we could set our own schedule, and visit little stops, shops, and sightseeing opportunities along the way.

Renting a large van for a large family did come with its own complications including researching vans available to large families, insurance, border regulations, manual transmissions, and parking.  First issue we researched was lease vs rental.  For long term (21+ days) car rental in Europe, most websites say it is cheaper to lease, but we found it was much cheaper to rent (even including the added  insurance) .

Leasing was a good option as insurance (CDW – collision damage waiver or LDW – loss damage waiver) was included.  This option probably works for most people traveling to Europe for that long – but for our big family, it was much more expensive than renting.  For example:

Since we were renting, we also needed to research insurance.  In Europe neither CDW nor LDW are included in your rental fee.  This is the insurance that pays for the rental car in case of damage/theft/etc.  Insurance that covers personal injury for people in the car and injury or people/objects outside of the car is included.  CDW/LDW insurance is offered by the rental car companies, but it is very expensive (for our vehicle insurance available through the agency included $1278  with an additional $668 for theft protection).  This insurance may be covered by a credit cards as long as you use the card to rent the vehicle, however, this did not apply for 9 passenger vehicles.

Insurance can also be purchased by online insurance companies.  The down side to getting your own insurance outside of the car rental company (either by credit card or online agency) is that you will be responsible for the entire repair/replacement costs until your credit company or policy pays (up to $40K in some cases).  We used insuremyrentalcar.com and paid $242 for a yearly policy (Year was the same as 5 weeks).

Our ground transportation (rental, insurance plus gas allowance was 3100$ for the month (averaging out at $100 per day or just about 15$ per day per person allowing us access to whatever and wherever we chose to go) vs 7 people continuous  Eurail pass for a month $4607 or 10 days travel for $3437 (neither which would have included our time in Iceland) and both restricting our travel times and destinations.

As we were traveling to multiple countries, we also needed to be sure that our rental was able to be driven across the borders both with the agency and the insurance company.  For example, some brands of vehicles were not allowed across certain borders.  Some were not allowed to be returned in other countries.

We also learned about tolls required for driving in some countries – which included Vignettes (stickers) in some and tolls in others.

Most rental cars/vans are manual transmission.  The new rental cars in Europe are smart cars and will let you know things like when you are too tired and should take a break, or when you are going outside of the lines, or over speed limits.

When planning, we were also able to speak with friends and family regarding opinions and recommendations.  Scott and I had not been to Europe since 1999 -the year before we started our family.  So we hadn’t been for almost 20 years and we had never been with kids.  Our beginning ideas ended up somewhat different from our final itinerary.  We wanted to visit everywhere –  our lists included Barcelona, Paris, London, Rome, Berlin, Athens, Amsterdam and Istanbul and everywhere in between.

Of course, there was no reality in that – so we had to narrow it down to what we could manage with 7 in a month.  Sadly, Istanbul was automatically crossed off as the state department issued warnings for American travel during the time we would be there. (Visit this government site for travel advisories.)

Friends reminded us that summer in the Mediterranean countries would be hot and very crowded, and that middle European countries (Germany, Austria, Switzerland) would be lovely at this time.  Czech Republic was also highly recommended – both for its history and culture as well as its affordability.

With these counties recommended along with the fact that we HAD to visit Paris, we sadly had to cross off Barcelona ( too far out of the way) and London (not as easily accessed with a rental as we’d have liked).  We narrowed more and added some to come up with a preliminary working itinerary including a cruise.

To include an easy access to a few destinations and also a bit of relaxation, we wanted to include a cruise as part of the trip.  We have sailed with Royal Caribbean in the past and were able to find a fantastic itinerary that allowed us to leave from Venice, Italy and visit Croatia and both Mainland Greece as well as 3 Greek Islands.  These would have been difficult for us to include by land transportation and provided an easy and fun way to relax and enjoy several stops without the continued packing and unpacking.

Once we had an idea for the itinerary, we began to look at lodging.  We looked into hotels, hostels and rentals. From what we were able to research, most European hotels are not made for large families.  Even in the big chains 2-3 to a room is standard, 4 people is rare and 7 is non-existent.  We would have had to buy 3 rooms at most hotels.

We also looked into hostels and even at 30$ per night (which would be very economical for a person) – multiplying that by 7 ran us 210$ per night.  And at that rate, depending on the location, we were sharing a communal restroom, or kitchen.

Rentals were highly recommended and as we researched we were able to find entire homes with fabulous views in fantastic locations for similar pricing.  Our average rate was $260 per night (again divided by 7 that averages out to 37$ per night per person) though when planning we found one that I just couldn’t resist that was much higher priced – so we rearranged and compensated that rental with 2 that were much lower.

We rented homes through Airbnb in all the locations and had excellent experiences.  A few recommendations:

So much planning – but so fun to build our excitement.  We felt that we researched the fundamentals, had some exciting sightseeing planned, yet hoped for spontaneity on this adventure too.

We felt we were ready and we were knowledgeable.  We had booked transportation and lodging and planned out itinerary but aside from one planned activity that needed to be reserved several days in advance (Iceland’s Blue Lagoon), we had no set plans.

We were off to enjoy the adventure of a lifetime visiting Iceland, Germany, Czech Republic, Austria, Italy, Croatia, Greece,  Switzerland and France. 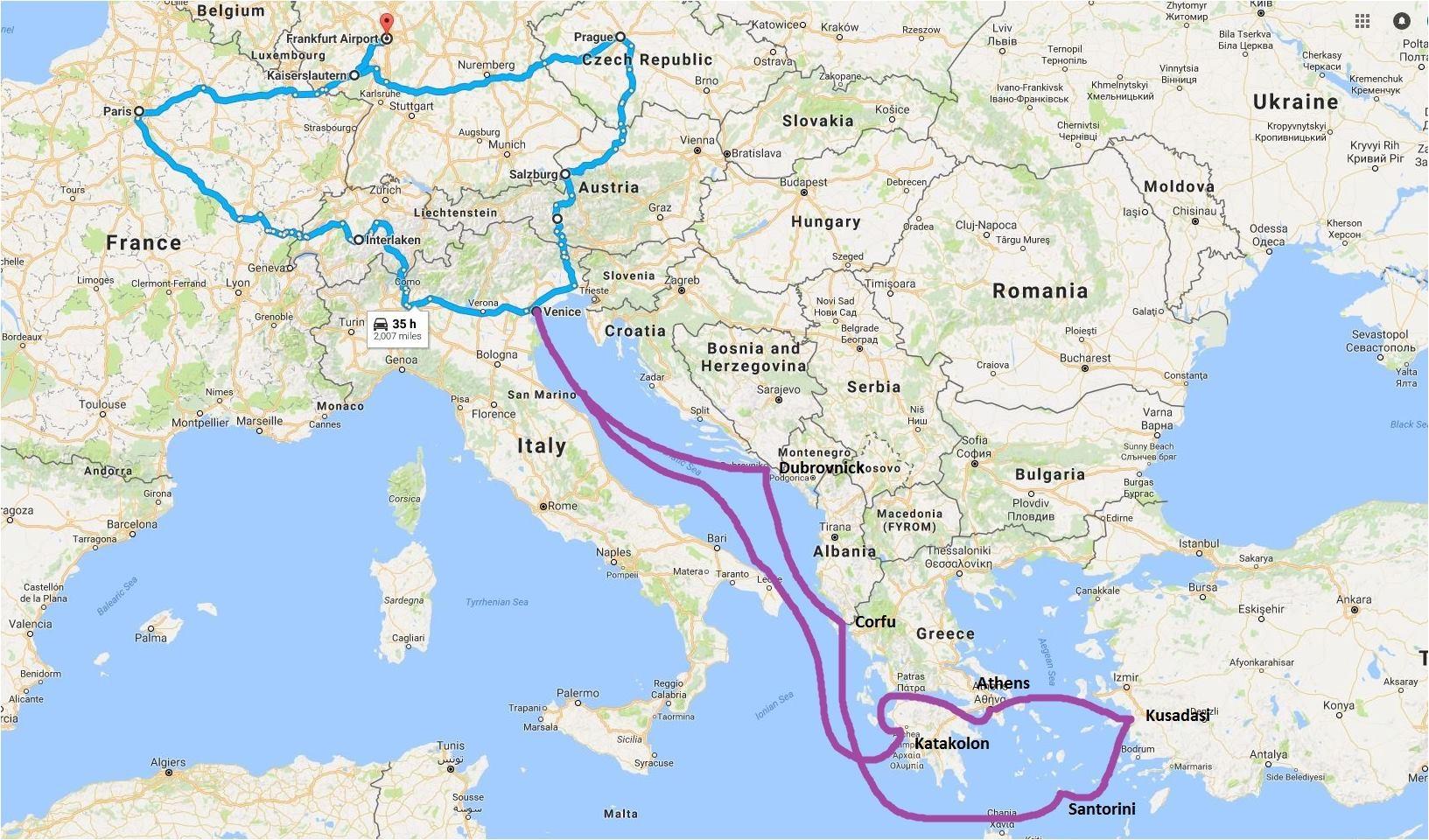 Editor: I’m very excited to share Terri’s next big adventure with you all! I hope you enjoy this ten post series – Big Family European Expedition.

previous10 Free Things to Do with Your Kids in the Great Smoky Mountains
nextIceland: Days 1-4 – Big Family European Expedition