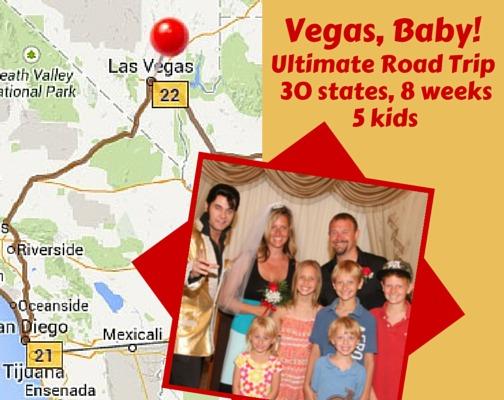 We thought we better not leave Southern California without a day at the beach…So we had one before leaving the Pacific Ocean for this trip.

The hotel loaned us bodyboards and the kids had a BLAST in the warm southern California ocean water! The water was perfect and the waves were enormous! The kids were having such a fun time that Scott and even I got out there to body surf! It was a riot! We also built sandcastles, and buried people and treasures in the sand….I think we probably could have spent the entire vacation right here doing this all the time…

We left and headed east away from the ocean for good for this trip. We were headed to Vegas – which MANY people warned me might not be the family-friendliest destination – but Scott and I celebrated our 20th anniversary this year and we thought it would be fun to renew our vows and where better to do that than Vegas…with Elvis officiating??

The drive was through the desert and I was surprised as I had never been through this direction and my assumption had been that it was flat dry and endless. It was dry – but that’s it. The mountains were beautiful in the background for the entire drive – and the Joshua tree was plentiful. Scott and I had many difficulties trying to decide what to include to visit this vacation and what we were just going to have to put on our list to see in return visits…California’s Joshua Tree and Death Valley Parks were ones we really struggled with as we were essentially driving right past them (although on this trip we were essentially driving right past almost everything –lol). It appeased me just a bit to see the tree along the road as we drove – and they became a running joke on that drive day.

We made it to Vegas and HAD to drive the strip on arrival. We arrived after sunset (of course) so it was all lit up. We probably looked quite a sight in our Midwest plated minivan with a rooftop carrier and 5 kids and a couple of grownups gawking out the windows – one taking pictures as we drove! We stopped by the Pawn Stars shop – but it was late and the stars weren’t there…kids thought it was pretty cool though. We finally checked into our hotel –way too late and without shopping at all…so I had nothing at all to wear to my vow renewal the next day.

I couldn’t sleep because I was too excited – so I was up early and thought I could do some research on wedding apparel available to me in Vegas…because there had to be something –right? I mean we were in VEGAS! I looked online and found nothing. I went down through the hotel shops – nothing. I called the front desk to ask for anything (a “bride” tee-shirt, a veil, whatever – I figured anything would be fine), …no one had any idea anywhere I could buy anything. Now I realize that this is an odd request at almost any other place on the planet but isn’t Vegas known for the quickie last-minute weddings?

I resigned myself to just wearing my dress (not my wedding dress because while that would have been awesome – carrying it through the entire US for a 10-minute ceremony seemed a bit much), just a regular dress – the only one that I had packed. I then promptly sat in someone’s yogurt breakfast leftovers – and while I was washing that out I was trying not to laugh at Grace’s sheer despair and full-on tears at the thought of going to her parent’s wedding – which I couldn’t figure out until she told us that she didn’t want us to get married and have MORE kids – unless it was a girl …. A girl would be OK.

That conversation lead to another about why mom and dad are even getting married because aren’t we already married? So while all this was going on – Scott reminded me that this is the life we have made for ourselves over the last 20 years – and isn’t it pretty wonderful – (minus the yogurt dress –lol)

All was forgiven and we were the BEST.PARENTS.EVER. when the limo came to the hotel to pick us up to bring us to the Graceland Wedding Chapel. The kids pretty much thought this was the best part of the trip so far. We got to the chapel and of course, THEY had wedding garb I could buy…so I got a veil and a cute little tiara (which promptly broke 5 minutes after the ceremony….). The rest was fantastic. Elvis walked me down the aisle serenading us to the tune of “I can’t help falling in love with you”…he actually performed the ceremony (as it did not have to be legal as we are already married) using awesome vows such as “I will love you tender. I will not have a suspicious mind. I will let you be my teddy bear. I will not be cruel.” I thought it was hilarious – he finished up by singing Viva Las Vegas while we had a dance party in the aisle. (which of course I could not take pictures of because they were photographing it and they wanted me to buy their photos- which I did but only 2 as they were rather expensive.)

We spent some time at the pool and then grabbed a bite to eat – the restaurants in the hotel are through the casino…the kids had quite a kick with that. We stayed at the Orleans Hotel and Casino which was just right off the strip. The property was huge including the hotel, the casino, shops, restaurants, 3 pools, and an event arena. We had to reserve two rooms but this was surprisingly affordable as the rooms were only 40$ per night. It was nice to have a bit of extra space to spread out. My cousins and aunt and uncle live in Vegas and we went to visit at my cousin’s house for a delicious dinner (including egg rolls made by my Aunt who is the best egg roll maker in the world) and a beautiful AND delicious surprise cake to celebrate our 20th made and decorated by my super talented cousin!

We spent the next day relaxing poolside..seriously…the entire day…we didn’t even leave to eat because getting dressed was too hard LOL. We celebrated our “honeymoon” with some tropical drinks and then finally left to nap and rest for the evening festivities.

My cousin and her family came for another quick round of pool fun for the kiddos and then a quick change for an evening walking the strip. We met my uncle and aunt and the native Vegas folk gave us Midwest gawkers a tour. We actually were there for almost 5 hours and only visited 3 properties! I cannot believe how huge they are!!

I was told that approximately 300,000 people visit Vegas each weekend…and each property essentially has the facilities of an entire town. Seriously – a mall at each hotel! We walked through the Venetian with gondolas and bridges and bell towers and honest to goodness a ceiling that reminded Joe, Luke, Scott, and I of a Hogwarts special effect – the sky was amazing and honestly, we all thought it looked as if it was moving!! It was not. Next, we HAD to see the fountain show at the Bellagio – we headed that direction through the shops at Caesar’s Palace and we rode a circular escalator (which by the way the kids thought was one of the coolest things on the strip)! We stopped into a gallery of a Las Vegas photographer, Peter Lik – and shopkeepers

were kind enough to show us into a room to showcase the transforming properties of the photograph and the light- the kids were tickled as the different lighting made the photo look different – it was pretty amazing. The fountain show at the Bellagio did not disappoint – it was so good that everyone wanted to stay for the next show which we did!

We also just HAD to see the volcano at the Mirage. On the way, we got a photograph with a minion and JOHNNY DEPP!!! Can you believe it? We just happened to be in the right place at the right time!! (the wax museum-lol) We finally got to the volcano which was an awesome show also but it was late and the fire scared poor Grace. We headed back to the hotel for a good night’s sleep before heading out to the National Parks in Arizona and Utah.