12 Fabulous Yellowstone Waterfalls with Little to No Hiking

Although Yellowstone is absolutely littered with waterfalls across every corner of the park, not all are on the easier side to access. Below we’ve listed twelve different falls that are not just easy to get to, but also must-sees when you visit the park.

Around the neighborhood of Mammoth Hot Springs where you’ll find two different but iconic waterfalls.

Just shy of five miles south from the hot springs, Rustic Falls carries less water than one may expect and displays more a sense of delicacy than of nature’s power. With a height of only 47 feet, its water spreads evenly over the surface of the rock to fall in a thin, lacy sheet. Use the pullover stop to view the falls.

Undine Falls lies a similar distance to the east of the hot springs and is visible from a large roadside pullout. At 60 feet tall, its tri-drop structure was mentioned by many early explorers and was featured on the cover of National Geographic in 1977.

Named for its surrounding stone features, Tower Fall looms 132 feet high beside the Grand Loop Road. Located two miles east of the Tower/Roosevelt Junction, the surrounding “towers” were formed by boulders that shielded the underlying conglomerate from eroding. A pullout off of the Grand Loop gives views of the fall or you can park at the Tower General Store and walk 100 yards from the parking area to another viewpoint. You can’t hike to the bottom of the falls because of severe erosion, but you can trek past the Tower Fall overlook .75 miles to view Tower Creek flow into the Yellowstone River. 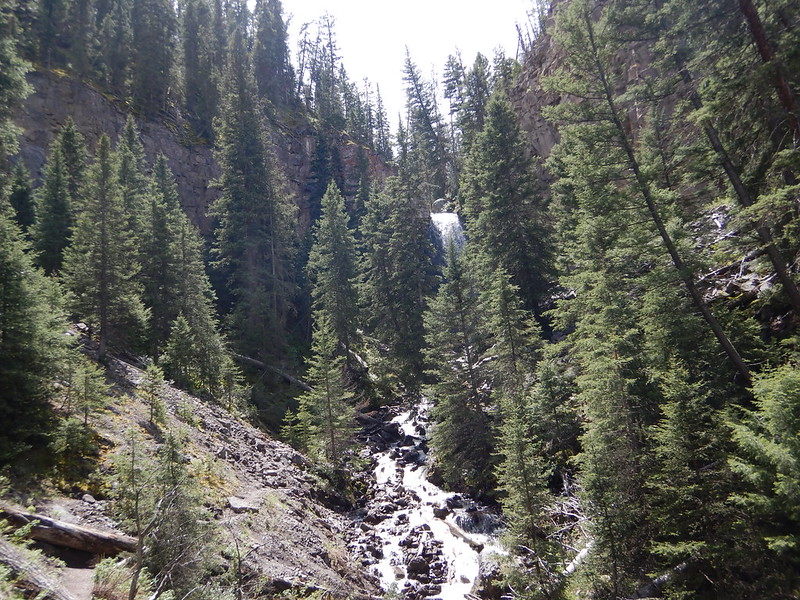 The trek to our next water feature is the longest on the list at 0.8 miles round trip. Lost Creek Falls flows down 40 feet in a mini-canyon area behind Roosevelt Lodge. This secluded waterfall short hike increases your chances to see wildlife, including bears, so be sure to have bear spray with you. Roughly 2.5 miles east of Norris Junction on the Norris to Canyon road, the Virginia Cascades tumble 60 feet into a deep canyon. Just barely off the roadway, the cascades can be viewed along a narrow road and through a lush blanket of pines.

On the shorter end of our list is where you’ll find Firehole Falls, standing at around 40 feet. Located half a mile upstream from the confluence of the Firehole and Gibbon rivers, the falls are observable from a one-way road, semi-hidden among the rocks and falls of the canyon.

A little over six miles to the east lies Gibbon Falls, a segmented cascade flowing near the Yellowstone Caldera rim. On its right side, it strikes a ledge, sending the water into the air with a rooster tail effect. The water on the left, meanwhile, spreads out into a wide cascade, which is more shallow. With easy access to view, a short walk from the parking lot, Gibbon Falls tends to be one of the more popular falls to see in the whole park.

Just about two miles south of Old Faithful Village, the often overshadowed Kepler Cascades spill down a three-tiered, 150-foot fall. With easy viewing access from a nearby parking lot and walk-outpoint, the Kepler Cascades have plentiful scenic views for an (unfortunately) underappreciated feature of the park.

Though quite far from the tallest in the park, Lewis Falls offers a peaceful backdrop for fishing, picnics, and nearby camping. Only 30 feet at its peak, Lewis Falls dips almost serenely along the Lewis River and can easily be seen from the roadside. You’ll find it roughly halfway between the South Entrance and Grant Village.

Moose Falls measures in just as tall as Lewis Falls, though things run hotter over here as the water is geothermally heated – sometimes to nearly boiling temperatures! Found just inside the south entrance of the park, you’ll find ample views above, below, and all around the falls, with a rumored increase in the likelihood of spotting moose, too.

Stacking up as the tallest in the entire park, the Lower Falls of the Grand Canyon of the Yellowstone tower at a staggering 308 feet. More than twice the height of Niagara Falls, numerous views can be found from both the east ( Inspiration Point, Grandview Point, and Lookout Point) as well as the west (Artists Point) side of the canyon, most of which are accessible by easy, short walks from the parking lots.

Though not nearly as big as the Lower Falls, the Upper Falls of the Yellowstone River have breathtaking qualities all their own that may just outclass their counterpart. From 109 feet high, the Upper Falls plunge powerfully into the canyon below, observable from the brink between the North and South Rim Drives.

Yellowstone has so much beauty, it is easy to pass by waterfalls that normally at home would be included in a whole day devoted to visiting and viewing. Even in 1870, Gustavus C. Doane a member of an exploration expedition noted when writing about Kepler Cascades:

“Following down the course of this stream we presently passed two fine roaring cascades, where the water tumbled over rocks to the depth of 20 and 50 feet successively. These pretty little falls, if located on an eastern stream, would be celebrated in history and song; here, amid objects so grand as to strain conception and stagger belief, they were passed without a halt.”

Although you can’t see everything during your trip to Yellowstone, take the time to enjoy what you have scheduled.

Save to your Yellowstone Ideas Board!

In addition to travel, Ryan enjoys watching baseball, reading about history, and studying conversational Japanese. His eventual travel goals include Rome, an ancient Shinto temple, and all 30 MLB stadiums.